3 Reasons The Bezos Divorce IS AN EXAMPLE For LOUISIANA Citizens

Hollywood and the American Stock Market were stunned to find out that technology mogul, Jeff Bezos, the founder and CEO of Amazon and his wife MacKenzie Bezos were calling it quits after more than 20 years of marriage. What we find more interesting is how the famous couple chose to handle their divorce in the public eye.

With the sensationalism of “gold diggers”, onlookers probably expected the Bezos divorce to be a financial “tug-of-war” that would drag out many revisions of the divorce agreement. This expectation for the worst is enhanced by the entertainment quality of drama. After all, bad press is still good press. The Bezos could have easily capitalized on the click-bait headlines, planned paparazzi shoots, and slanderous interviews with Hollywood’s biggest gossip celebrities. Instead, the Bezos took a more mature approach. They worked together through Twitter.

On Thursday, April 4, 2019, MacKenzie Bezos and Jeff Bezos finalized their divorce details on Twitter. According to Karen Weise of New York Times, “Mr. Bezos will keep 75 percent of the couple’s Amazon stock and all of their ownership of The Washington Post and the Blue Origin space company... “sole voting authority” over Ms. Bezos’ Amazon shares… [and] Ms. Bezos will own roughly 4 percent of Amazon, a stake that was worth almost $36 billion on Thursday… [and is] entitled to roughly half of their assets.

Now, of course, Hollywood is not without its fair share of scandal. Many people were speculating the cause of their divorce. This led to the unraveling of a scandalous exchange between Mr. Bezos and Lauren Sanchez, a former Los Angeles Tv Anchor. Despite these tabloid speculations, the Bezos have maintained a low profile on social media, only speaking fondly of each other and their futures. Ms. Bezos wrote on twitter about her excitement for her own plans in the future, while Mr. Bezos wrote fondly of his soon to be ex-wife on Twitter, describing her as “an extraordinary partner, ally, and mother”.

The Bezos behavior during their divorce is something to be admired. Because they worked together and split their investments fairly, they were able to have a speedy divorce process. This is the perfect way to handle divorce as a public figure. After all, marriage is a financial partnership, so whatever helps Jeff Bezos financially, helps his wife as well.

Louisiana can learn a lot from MacKenzie Bezos and Jeff Bezos. 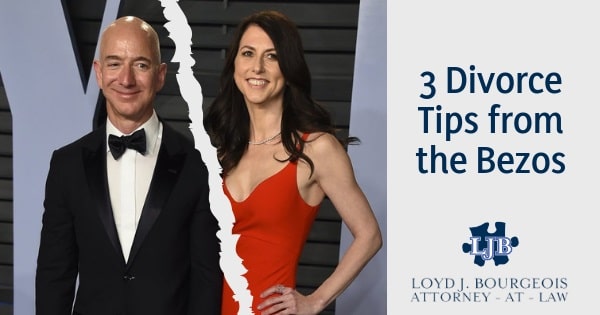 According to the American Psychological Association, “about 40% to 50% of married couples will file for divorce in the United States.” With such a significant percentage, there has to be a long separation period to give all files a chance at being seen. Unless you are in an emergency situation, the process of divorce can take some time. During this period, couples can work amicably together to bypass the court stage and get their divorce approved more quickly.

By working together to divide their assets, while also avoiding slander and scandal, the Bezos have managed to have a quick, painless divorce. Now your situation may not be as ideal as theirs, but you can still make an effort to protect your case during a divorce. The Bezos followed 3 crucial steps of a successful divorce: they protected their social media profiles, untangled their joint accounts and assets, and most importantly, neither left their spouse empty-handed.

Learn how you should protect yourself and divide your finances in our FREE book, 16 Sensible Actions to Help You Plan and Prepare for Your Divorce. With this free resource, you will become efficient at monitoring your account information, knowledgeable of how much money you should take from a joint account and when, and become confident in your ability to plead your case in front of a judge.

Every minute counts when it comes to your hard-earned dollars. Protect yourself by downloading a FREE copy of 16 Sensible Actions to Help You Plan and Prepare for Your Divorce. Then call 985-240-9773 so our firm can put you on the path to financial freedom and success.