Allison, a mother of two, was on her way to pick up her 10-year-old son Henry from baseball practice.  She stopped at a stop sign a few blocks before the field.

Behind her at the stop sign was James, driving his work truck for ABC Telephone Co.

As James approached the stop sign, his foot slipped off of the brake and he struck the rear of Allison’s car.  James was on the clock when the wreck occurred.

Allison claimed injuries to her head, neck, and left shoulder.  She went to the emergency room immediately following the accident for treatment and sought follow-up treatment with a chiropractor, orthopedic surgeon, neurosurgeon, and a pain management doctor.

Even the insurance company’s chosen doctor agreed that Allison had a cervical strain and lumbar strain.

When Allison could not reach an agreement with James’ insurance company, she filed suit and prepared for trial.  Her case was a slam-dunk, rear-end collision.

But, you will not believe what happened when her case went to a jury…

Louisiana injury attorneys know that in cases of a rear-end collision, there is a well-established legal presumption that the rear car caused the wreck.

This presumption holds true except in a few limited circumstances.

This means that in most rear-end collision cases liability is not disputed. In these cases, the insurance company simply tries to minimize damages – or the amount they must pay to an injured party.

Allison and her attorney were confident in their case.  After all, James admitted he caused the collision and Allison had immediate treatment and follow-up care.

If the insurance company would not make a reasonable offer, Allison was ready to take it to the jury – and she did.

The jury found there were no damages – this means Allison does not receive any money for her pain and suffering!

The jury agreed that James was negligent in causing the accident.

After all, he admitted it and there really was no question in this rear-end collision case of what caused the wreck.

But, the evidence showed James’ vehicle was only going three miles per hour at the time of the crash and the airbags did not deploy. 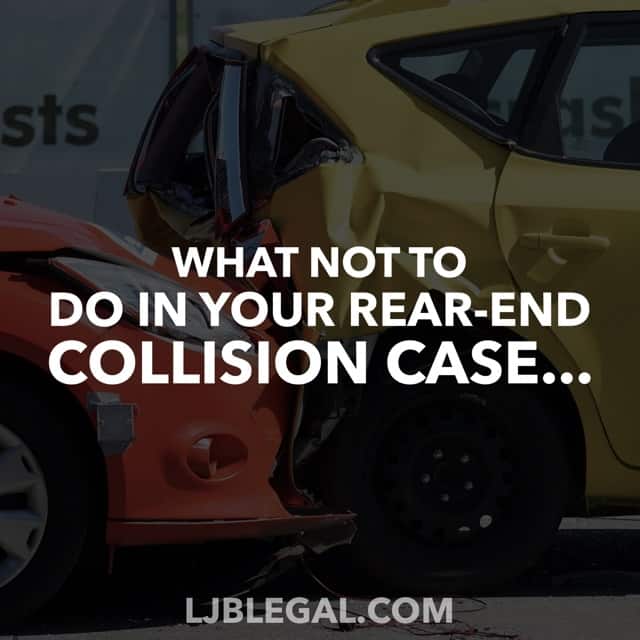 And, throughout the case, Allison made THREE HUGE MISTAKES that ended up costing her any recovery for her pain and suffering.

Mistakes Made After Being Rear-Ended:

Allison’s case is a cautionary tale of a good, winnable case gone bad because of, in my opinion, credibility issues.

Allison may have been able to overcome any one of those three huge mistakes she made, but her credibility took a beating in the jury’s eyes, and in the end, they just could not see themselves awarding her damages.

Please note: This is my dissection of an actual case (not mine).  Names have been changed.  For further reading, see Williams v. Cequel III Communications, I, LLC, et al.

To discuss how Luling car accident attorney Loyd J. Bourgeois can help you prepare your rear-end collision case, give him a call at (985) 240-9773.

by Loyd J. Bourgeois [email protected]
Connect with me
Nationally recognized attorney dedicated to fighting life's legal battles with compassion and care
1 Comments
Great post! Hiring an attorney to represent you is always the right choice for motor vehicle accidents. It will give you time to heal and recover stress-free, while your attorney fights for your right to financial compensation for medical bills, damages, and pain and suffering.
by Mark Schiffrin P. A. August 9, 2018 at 01:07 AM
Post a Comment