Is Social Security Affected by a Government Shutdown?

What Will Happen to my Social Security if the Government Shuts Down?

Many New Orleans-area Social Security Disability claimants and recipients are wondering if the government shuts down what happens to social security and their benefit checks, application, and/or hearing.

The government briefly shut down fully twice in under a month in early 2018. On December 22, 2018, the government entered a partial government shutdown after President Trump would not sign the temporary spending bill passed by Congress. This shutdown was only a partial shutdown due to the fact that some departments had already been funded through September 2019. The Department of Health and Human Services which includes Social Security was included in this previous spending bill and therefore was not affected by this partial shutdown.

Unfortunately, due to the current trend of Congress only approving short-term stop-gap measures instead of long-term spending bills, the threat of a government shut down is now a common occurrence.

Government shutdowns are often averted at the last minute. Hopefully, that will be the case again this time as well.

Are Social Security Checks Affected by a Shutdown?

The first thing most people want to know is "Will I Still Receive my Social Security Disability Benefits in a Government Shutdown?"

When the federal government shut down in 1995 and again in 2013, all Social Security payments continued to be sent out on time. This included Social Security Disability.

During the 1995 shutdown, which lasted about a month, the Social Security Administration mailed checks throughout the shutdown.

Social Security was able to continue mailing benefits due to the fact that doesn’t need Congress to authorize funds for it each year.

Instead, Social Security benefits are considered mandatory spending and are paid from the program’s trust fund, and therefore, the agency has the funds to continue paying benefits.

Since payments are now direct deposited and/or loaded onto debit cards, Social Security continued processing payments during the 2013 shutdown with fewer employees than were needed to mail benefit checks during the 1995 shutdowns.

Unfortunately, there is an additional reason to worry about a government shutdown and social security checks in 2021.

While payments can continue to be processed during a government shutdown, it is possible that there would not be sufficient funds to pay for benefits if the debt ceiling is not raised. Unlike previous shutdowns, this battle is not just about passing a spending bill to fund the government, but also about raising the debt ceiling.

At this time is it uncertain where the government would make spending cuts if it is unable to borrow the money needed to continue spending at its current pace.

Social Security beneficiaries could be at risk of not receiving their benefits for the first time since the program was established in 1935.

Are Social Security Offices Open During a Shutdown?

Currently, most local Social Security offices are already closed to in-person visits due to COVID-19 precautions.

The Social Security Administration is asking the public to first try to use their online services before calling them.

During a government shutdown, many SSA employees will be furloughed and staffing will be limited. Using online services before calling is still the best course of action.

If you cannot use these online services, you can find the phone number for your local office by using the Field Office Locator.

What Happens to my Scheduled Social Security Disability Hearing in a Government Shutdown?

Most likely, hearing offices will continue to hold Social Security Disability and SSI hearings if a shutdown occurs.

New hearings were not scheduled.

Lack of support personnel caused delays in exhibiting files and decisions were not written during the shutdown.

So, if a claimant was waiting for an already scheduled hearing, it in most cases proceeded and was decided.

What Happens to my Social Security Disability Application in a Government Shutdown? 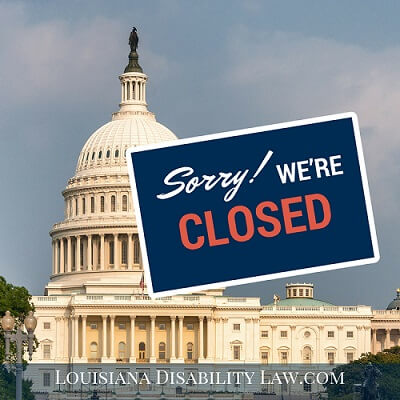 During the Clinton-era shutdown, new Social Security claims were not being processed because the agency furloughed 61,415 employees. As the shutdown wore on, the agency adjusted its plan and recalled workers to start processing new claims. Whether new claims are processed at all or with a delay due to fewer workers will depend on how many employees the SSA decides to maintain and how many they decide to furlough.

The SSA’s 2013 government shutdown contingency plan stated that new and pending Social Security applications would continue to be processed as well as requests for appeals.

However, because these functions are carried out by the state Disability Determination Offices, each state will decide whether to continue these operations or stop them.

The most likely scenario is that applications will be processed but with some delay.

The delay will be dependent on how many employees are retained and how long the shutdown lasts.

Whenever a threat of a shutdown looms, I monitor the situation checking Social Security's contingency plan often.

If the government shuts down again and the debt ceiling is not raised, I will be in touch with all of my current clients to advise them on how this situation will affect them depending upon the current status of their claim.