A tort is a wrongful act or an infringement of a right (other than under contract) leading to a civil legal liability.

One example of a tort is a car crash. The other driver may not have intended to hit you but due to either inattention or failure to obey highway laws or some other reason, they may have crashed into you infringing your right to the roadway. This is a negligent tort.

Another example is if someone punches you - a battery. This is an intentional tort.

What are the 3 types of torts?

The three main types of torts are negligence, strict liability, and intentional torts.

What is an example of a tort?

Examples of negligence torts include – automobile accidents, professional malpractice (medical, legal, accounting, engineering, etc.), dog bites, bicycle collisions, etc. Generally, any situation where another person or entity may have caused or contributed to any injury. 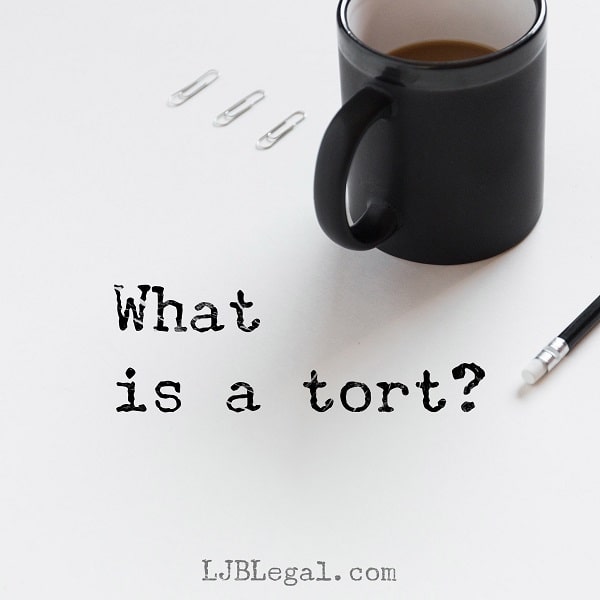 Examples of intentional torts include things like assault and battery (fighting).

What about 'Tort Reform'?

So, when you hear of TORT Reform – think, someone is looking to reform the law because they don’t like being accountable for their own actions and responsibilities. Not surprisingly – most of the Tort Reform advocates and supporters are insurance companies and major business interests. And, instead of changing their behavior, they want to change the law and take away your rights.

Recently, “Tort Reform” advocates were successful in changing many of Louisiana’s laws to make it more difficult, costly, and burdensome to hold others accountable for their own negligence in an effort to “reduce costs” and “save money.”  Now that they've tasted some victory after years of trying, we can bet they are not done in continuing to take away more of your rights to be made whole.

And while tort reform “advocates” have many statistics (you know what they say about statistics – “lies, damn lies, and statistics”), here are a couple of things to keep in mind:

“But it is not really an issue that is going to excite Joe Six-Pack to call their legislator and press for tort reform. And so, the change in strategy was we kind of tied tort reform to automobile insurance this time.”

Is someone referring to you as "Joe Six-Pack" really looking out for your best interests?

While everyone can agree that Louisiana’s insurance rates are high and we all would welcome relief, giving up your rights isn’t the way to do it and turns out won’t have an effect on insurance rates at all.

Look, as a person, a tax-payer, and business owner, I hate the high cost of insurance and litigation first mentality of so many. But, I see – from the front-lines, every day – the devastating effects “tort reform” has and continues to cause! Consider this:

Current tort-reform advocates want to put a cap on all commercial vehicle accidents at the same level it was set for medical malpractice cases 30 years ago!  They further argue courts are so over-stressed with “frivolous” lawsuits, they cannot operate properly. But, studies indicate civil filings have decreased by almost 50% since 2010 in some states, and tort cases (those primarily filed by individuals against a business or insurance company) only account for about 4% of civil cases!

It’s not about lawyers “getting rich.” Everyone deserves the right to recover their medical expenses and lost wages after a serious car accident. You should not lose everything you have worked your whole life for just because someone was distracted on the road.

I encourage all of you to look deeper into any tort reform efforts.  Look specifically at who is funding these efforts (hint: it’s not consumer advocates looking out for your best interests).  And, make your voice heard by calling or writing your state representative and letting them know your stance on these measures designed to take away your rights – often at a time when you need them the most!