How Much is my Herniated Disc Case Worth?

What Exactly is a Herniated Disc or Ruptured Disc?

Basically, a herniated disc is a disc in your spine that has ruptured.

Discs are the cushions that separate the vertebrae and protect the spine.

A disc becomes herniated when the outside of the disc (the annulus) is cracked and the inner part of the disc (the nucleus pulposus) leaks its jelly-like center and irritates the surrounding nerves.

How Much Compensation Can I Expect for My Herniated Disc?

If you’ve been in an auto accident and have suffered from a herniated disc, you may be wondering what your claim is worth.

Only once you know how much your herniated disc claim is worth can you negotiate with the insurance company for a fair settlement for your injury.

Disc herniations are painful, permanent injuries that require a substantial settlement value due to the seriousness of the injury. That being said, coming up with an injury case evaluation is difficult. 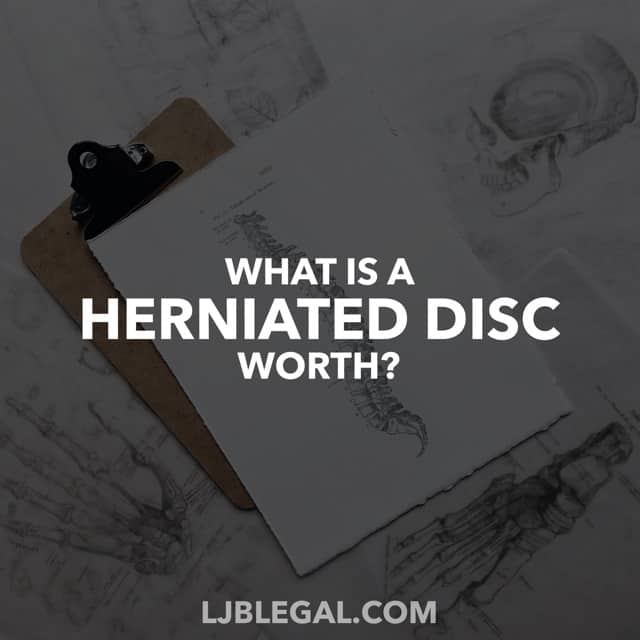 Generally speaking, your personal injury damages include some or all of the following that impacts the case’s worth:

What Is the Average Settlement for Herniated Disc Injuries?

It is difficult to determine average herniated disc settlement figures because most settlements are confidential and the data is not readily available.

If liability is not an issue, most disc herniation cases with surgeries settle above $50,000, occasionally going north of $100,000, and cases without surgeries tend to be below $50,000.

Because there are so many variables involved (surgery/no surgery, insurance coverage of at-fault driver, etc.), herniated disc claims can settle for as high as $1,000,000 or as low as $1,000. It really all depends on the facts of the case.

Would I Have Better Results If Took My Herniated Disc Case To A Jury?

This means that a few disc herniation cases are awarded very high jury verdicts, but most are under $100,000.

Only about 5% of these cases ever see jury verdicts over $1 million.

There are many variables the jury must consider when reaching their conclusion.

Symptoms of a Herniated Disc May Not Happen Overnight

If you’ve been involved in an accident, you may not feel the symptoms of a herniated disc right away.

Even if you are treated in the emergency room after your accident, your herniated disc won't show up on a physical exam.

You probably won’t get diagnosed with a herniated disc because emergency rooms generally use a CT scan and those types of injuries are usually found on an MRI.

The most commonly reported symptoms are sudden and intense pain in the lower region of the back, numbness in the legs, debilitating pain in the hips, leg pain, and muscle weakness.

It is very important for your health and your injury claim that you follow all medical advice.

If you’ve been in an accident and are experiencing some of these symptoms or have been diagnosed with a herniated or ruptured disc, don’t hesitate to call our law firm!

You need legal advice to ensure that you get a fair settlement from the insurance company.

You have been injured and there’s no shame in getting reimbursed for lost wages and trying to get back what the accident took away from you. Our team will walk with you every step of the way. No gimmicks.

We set ourselves apart by taking the time to actually listen and go the extra mile.

Our team is experienced in handling herniated disc cases. We will work with your doctors to get a full understanding of your injury and limitations. We know that this is a stressful time for you so we take on the burden of tracking down medical records and forms.

Right now, you don’t just need an injury lawyer. You need a trusted advocate and confidant – someone whose only interest is your best interest.