Hurricane Ida Insurance Claims: What was the experience in the first 3 months?

Most people we talk to have never been in this situation before and they're wondering if their experience is normal. We wanted to find out. What is a "normal" insurance claim experience like right now? 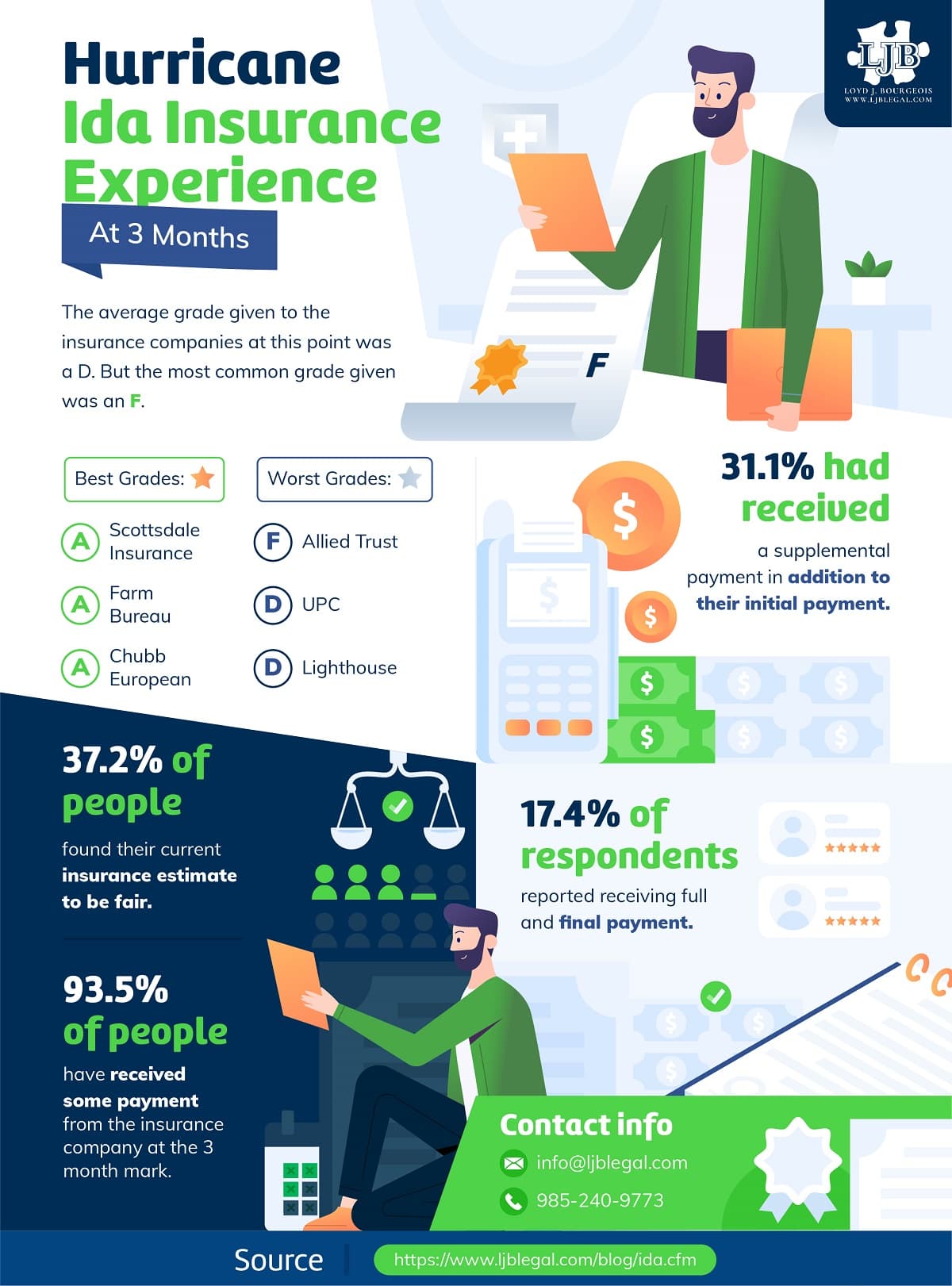 We asked respondents to rate their insurance companies 3-months post-storm with an A, B, C, D, or F.

The average grade given to the insurance companies at this point was a D, but the most common grade assigned was an F.

Although Scottsdale, Farm Bureau, and Chubb European were the standouts earning all A ratings.

Allied Trust, UPC, and Lighthouse had the lowest average ratings.

How Many People Have Received Initial Payment?

93.5% of respondents had received at least an initial payment from the insurance company at the 3-month mark.

How Many People Have Received Supplemental Payments?

31.1% of respondents have received a supplemental payment in addition to their initial payment.

Is It Enough Money?

Only 37.2% of respondents thought their total payment so far would cover their entire damage repair cost. 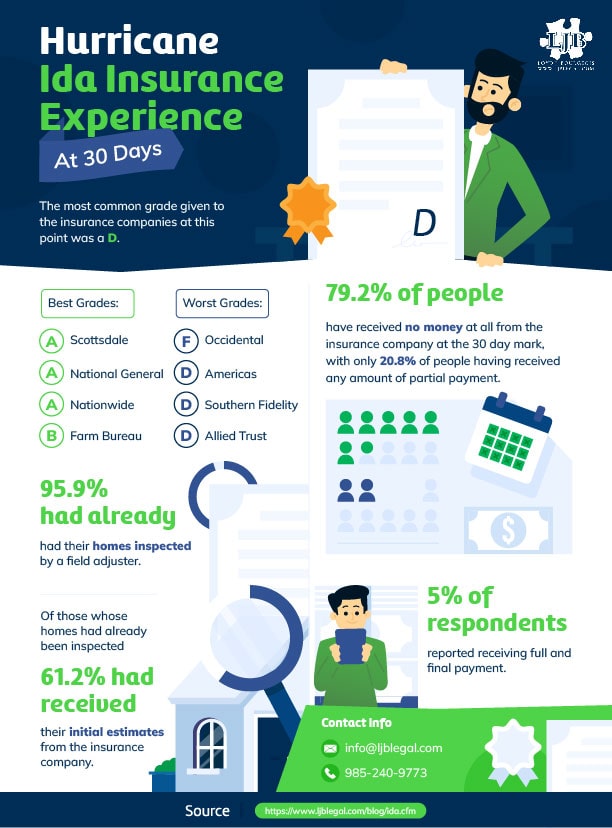 How Does Your Insurance Company Compare to Others?

We asked respondents to rate their insurance companies at this point 1-month post-storm with an A, B, C, D, or F.

The most common grade given to the insurance companies at this point was a D.

Although Scottsdale was only mentioned twice and National General and Nationwide once each, they were the standouts earning all A ratings.

Of insurance companies that were reported 3 or more times, Farm Bureau had the highest rating with a B average and Occidental had the lowest with an average F rating.

What Kind of Insurance Coverage Do People Have?

93.3% of respondents had hurricane coverage in their main policy.

Leaving 2.2% of respondents with no wind/hurricane coverage for their homes.

85.6% of respondents were covered by flood insurance.

28.1% of respondents were not aware of the amount of their hurricane deductible before Ida made landfall.

What Kind of Damage Did Most People Sustain?

Where do People's Insurance Claims Stand?

At one-month post-storm, 95.9% of respondents had already had their homes inspected by a field adjuster even though the Insurance Commissioner of Louisiana had extended the deadline for insurance companies to initiate claims to 60 days post storms.

State Farm and Allstate were the only 2 companies that did not have 100% of their inspections done, however they were also the two insurance companies with the most responses in our survey.

Of those whose homes had already been inspected, 61.2% had received their initial estimates from the insurance company.

Only 31.3% of those people found the initial estimate to be fair.

American National, National General, Nationwide, and Scottsdale all had only 1 or 2 responses in our survey, but all had 100% of respondants who believed their initial estimates were fair.

Of insurance companies with 3 or more responses, Farm Bureau had the highest percentage of claimants who believed their insurance estimates were fair with 75% of their respondents feeling that the initial estimate was a fair amount of compensation for their damages.

ASI, Banker's Insurance Group, Lighthouse, and Occidental all did not have a single respondent who had so far received an initial estimate and therefore they could not be evaluated for fairness.

79.2% of people have received no money at all from the insurance company at the 30-day mark, with only 20.8% of people having received any amount of partial payment.

Our informal survey was held online and accepted responses for 10 days from September 29, 2021 to October 8, 2021. There were 120 responses and 85% of responses were from St. Charles Parish.