The 7 Most Common Insurance Disputes After a Hurricane

Hurricane Ida has passed and left your home, business, or property devastated.

Now, your insurance is fighting with you and does not want to pay you for your damages.

Based on my experience and knowledge of hurricane claims, these are the Top 7 Hurricane disputes you may face from your insurance company.

Was physical damage to your property caused by the storm?

While common sense says that if rain caused interior damages to a home or business during a hurricane, then the residential or business’ policy will cover and pay the claim to repair the damages.

However, the determination is not quite as clear-cut as simply having rain damage during a hurricane. 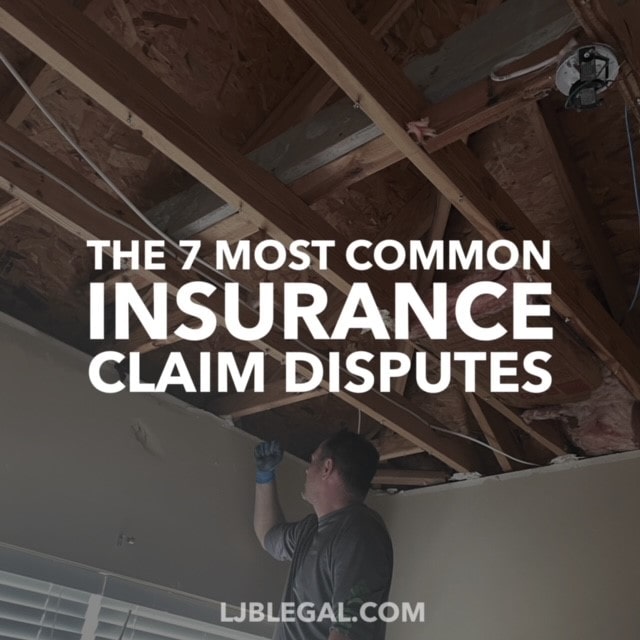 Most property policies are relatively clear that water damage to the interior of a building during a hurricane will only be covered (assuming that there is no flood coverage endorsement) when the water entered the building as the result of a covered cause of loss – i.e., if the wind (a covered peril) caused an opening in the building (physical damage) and permitted the entry of wind-driven rain into the interior of the building.

When the rain damage to the property was not caused by wind, no coverage typically exists.

During a hurricane, it is not unusual to have water damage to the interior of a building without any actual physical damage to the exterior of the building.

For example, wind-driven rain can seep into your home or business around balconies, doors, and windows even though there was no physical damage to the building that caused an opening. Many policies exclude damage due to "wind-driven rain."

Therefore, the important inquiry is not whether the rain damage occurred but whether that damage was the result of physical damage caused by the wind.

If your insurance company fights you on this, you will need an expert to help you prove that exterior damage was caused by the wind and that the resultant interior damages are covered.

The insurance company may also claim that the damage was pre-existing. Frequent arguments are that there was a previous leak or that damage is due to foundational settling.

Depending on the type of damage, pictures of your home before the storm can help prove no prior damage. In other cases, you may need an inspection and report from a structural engineer.

Was the damage to your property caused by an excluded cause?

In addition to the "wind-driven rain" mentioned above, during almost every hurricane, storm surge and flooding cause significant damages.

Yet, all residential and most commercial property policies contain a specific water exclusion that excludes coverage for flood and storm surge caused damages.

Therefore, unless you have a flood policy or your business policy contains an additional flood endorsement to provide coverage, water damage caused to a building from flooding or storm surge during a hurricane is not covered.

The delineation of flood versus wind damages has been extensively litigated.

If you are in a situation where you have both wind/wind-driven rain and rising water damages, you will likely need a skilled attorney and expert to help you make sure that you are not shortchanged by your insurer(s).

In short, the difference between “actual cash value” (ACV) and  “replacement cost value” (RCV) is depreciation, or wear and tear.

ACV says that the property that was lost has probably depreciated by some amount over time, and attempts to inject depreciation into the equation.

For example, say Hurricane Ida destroyed your roof that originally cost $12,500 to install 10 years ago. While it may have been in good shape for a ten-year-old roof, it was not brand new.  Some wear and tear inevitably occurred.  Under ACV, the insurance company determines that $500 of depreciation occurred each year since the purchase so that the old roof was only worth $7,500 at the time of the loss.  They would then pay you $7,500 minus any applicable deductible.

RCV is the cost of replacement of the lost property with an identical or similar piece of property.

In our roof example, if it costs $15,000 to replace the roof, the insurance company will pay you the $15,000 less any applicable deductible.  Case closed. It does not matter if the roof was showing the effects of age.

The question of which you are paid is dependent upon your policy.

Some Replacement Cost Value policies require that, in order to obtain the full replacement cost of the property, repairs must first be completed. Your insurer may pay the Actual Cost Value upfront and hold the remaining payment  (recoverable depreciation) until the actual repair or replacement is completed.  This prevents the insured from pocketing the money without completing the repairs and gaining financially from the loss.

There is no set formula for calculating depreciation so this often leads to disputes with the insurance company.

Do co-insurance provisions of your policy apply and how will they reduce your payment?

Coinsurance clauses are an area of great dispute.

A coinsurance clause requires the insured to maintain insurance on the insured property equal to its actual cash value or a certain percentage of it.

If an insured has underinsured its property, the coinsurance clause will operate to decrease the amount recoverable under the policy by the percentage that the property was underinsured. Coinsurance penalties typically apply to both property damage claims and business income claims.

Disputes usually arise over the values used to determine whether the coinsurance clause applies and, if so, how much the clause reduces the claim. These disputes are usually highly fact-specific and policy-dependent.  If you are in a co-insurance dispute, you should have an experienced hurricane damage attorney on your side.

Business losses that are attributable to depressed business conditions that resulted from a catastrophic event such as a hurricane, or mandatory evacuation, will not be covered.

Extended business income additional coverage begins on the date when that the property is actually repaired, rebuilt, or replaced and operations are resumed and extends the business income coverage up to an additional thirty (30) days beyond completion of repairs.

By its express terms, the extended business income additional coverage expires on the earlier of:

Disputes regarding continuing business losses after the period of restoration typically arise in cases where the insurer is claiming that the insured has failed to take reasonable steps to restore business operations to the pre-loss level.

Consequently, disputes arise over the meaning of the terms ―date you could restore, ―your operations, ―reasonable speed, ―the level which would generate, and ―business income amount that would have existed if no direct physical loss or damage had occurred, specifically in the context of each claim.

For example, an insurer could deny a claim for extended business income coverage if the insured made no efforts to generate business by publicizing or informing its potential customers that it had reopened for business.

The insurer could also deny a claim for extended business income coverage because the business’ losses were caused by depressed economic conditions as a whole rather than by the insured not yet being able to generate the business income that would have existed pre-loss.

A dispute could also arise over the level of business income that would have existed if the physical loss or damage had not occurred.

While this issue is highly fact-specific and policy-dependent, it is important to remember, however, in any coverage dispute, YOU (the insured) bears the burden to prove coverage.

Therefore, if the insurer denies the claim because the losses are due to local economic conditions, the insured has the burden to show that their losses resulted from direct physical damage.

Similarly, if the insurer denies the claim on the grounds that the insured failed to take reasonable measures to restore its operations, the insured must show that either:

What is a reasonable period of restoration for recovery of business income losses and extra expense losses?

The determination of what constitutes a reasonable “period of restoration” for recovery of business income loss is another area of dispute.

Commercial property policies often provide for the recovery of actual loss of business income sustained during the period of restoration of the business property when its business operations were suspended.

Typically, the period of restoration begins 72 hours after the loss and ends on the earlier of ―the date when the property should be repaired, rebuilt, or replaced with reasonable speed and similar quality or the date when the business is resumed at a new permanent location.

The period of restoration can extend beyond the expiration of the insurance policy if repairs have not been completed and the limits have not been exhausted.

The period of restoration is not necessarily the actual period of time that it took to perform the repairs – it is merely the reasonable period of time in which the insured should have repaired or replaced the property with reasonable speed and similar quality.

The period of restoration for any claim is fact-specific and dependent upon the interpretation of the terms in the policy’s definitions.

Disputes may arise between the insurer and you regarding the interpretation of fact-specific terms in the period of restoration, definitions such as “reasonable speed,” “similar quality” and “resumption of business.”

The application of these terms to the specific facts of a claim can also create disputes, especially following a hurricane.

For instance, everyone has experienced a contractor that has become non-responsive and does not perform its work in a reasonably speedy manner.

Are repairs necessary to comply with current building code covered by your policy?

Most property policies do not cover the increased costs to upgrade the building to meet current code requirements (building, plumbing, electrical and/or fire codes etc…).

This is extremely important in the aftermath of hurricanes as often new building codes and/or local requirements are put in place.

This is also relevant if your home was built prior to other major storms after which significant building code modifications were instituted.

The “Ordinance Or Law” exclusion found in most policies provides that the insurer will not pay for a loss or damage caused by an ordinance or law.

Moreover, the exclusion applies regardless of any other cause or event that contributes concurrently or in any sequence to the loss.

If a building is repairable but current code requirements increase the cost of repairs, the Ordinance Or Law exclusion typically operates to prevent the insured from recovering for the increased costs incurred to meet those requirements.

Disputes can arise between you and your insurer after you incur the increased construction costs, expecting those costs to be covered by your commercial policy, and the insurer either denies the claim for increased costs or only agrees to pay only a portion of the costs incurred.

Again, if your insurer is claiming that some portion of your damages is excluded because of the increased cost of compliance with ordinance or law, you should consult with an experienced hurricane flood or homeowner’s damage attorney.

If you are facing any of these disputes with your insurance company, please give us a call at 985-240-9773 for a free strategy session.

We were here before the storm, and we will be here long after. We will get through this together.